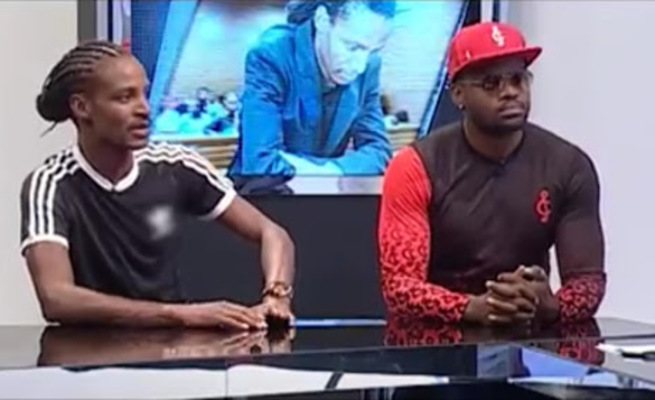 You would be forgiven for wondering when DJ Cleo and Brickz buried the hatchet especially after Cleo called the convicted rapist his "brother" this week.

Cleo made the claim after he had to defend himself from backlash for posting a picture of himself with the convicted rapist in prison. Cleo claimed the star had "fallen" in his life journey.

While many slammed the DJ and labelled him a "rape apologist." others applauded him for supporting his friend.

Over the past few years Cleo and Brickz travelled a rocky road together, including nasty rumours and messy breakups.

Here's a refresher course of their relationship.

2003/4- DJ Cleo is one of the hottest DJs in the country and establishing himself as a music boss by scouting and working with some top young wannabee artist. The muso spots the talent of a young Sipho "Ndlovu, who goes by the name of Brickz.

Together they form a powerful team responsible for mega hits like Sweetie My Baby, Tjovitjo and Left, Right.

The pair are so close in fact that Brickz even apparently named his son after his mentor.

2007- Although the relationship has become strained, it reaches breaking point when Brickz is quoted in newspaper reports claiming that Cleo liked to "caress and spank" him.

It was also claimed that he slumped into a sulk when Brickz or others were around their girlfriends. Cleo responded by saying Brickz was bitter and should focus on fixing his failing career.

2011 – Brickz apparently apologises to Cleo privately for the comments made.

November 2013- Brickz is arrested for allegedly raping a teenage relative. He went on to spend the next four years on trial, with Cleo claiming to have never once gone to court to support him.

2015- A Sunday Sun report claims Brickz wanted to mend his broken relationship with Cleo and reached out to the DJ. The paper claimed that Brickz thought Cleo could resurrect his career, but Cleo was only willing to help if Brickz publicly apologised for his previous comments about Cleo.

2016- The pair meet up at an event where, for the second time in a year, Brickz asks Cleo to work with him again.

March 2017 – While still on trial, Brickz manages to record a song with DJ Cleo called Amafluit.

The pair also spoke to Real Goboza about Brickz' drug problems amounting to more than R2-million, which they claim caused a rift in their relationship.

"We’ve never really come out about it, but obviously I was protective of him, but now it’s just the perfect platform to say it strained a perfect relationship. And now that he’s clean, two years clean, we’re back to making music and making people dance."

July 2017 – Brickz is found guilty of rape. He is later sentenced to 15 year in prison.

November 2017 – DJ Cleo told TshisaLIVE that he had been in touch with Brickz and wanted to record with him before he went to prison. He said that Brickz now had to serve his time "like a man".

"We have a very close relationship and after the fall out he apologised. We kept in touch, but I was waiting for the rape case to conclude so that we could start working. It was just taking forever.

"It is not my place to say whether or not he is guilty. I think the law has taken its course and highly qualified people handled the matter so, based on that, he has to serve his time and take it like a man," he said.

February 2019 – DJ Cleo reunites with Brickz at a sporting event held in prison by a non-profit organisation, Humanitarian Empowerment.

Reflecting on the experience, the DJ wrote on social media that everyone had to run their own race and the disgraced kwaito star had fallen during his. He added that the race was not yet over for Brickz.