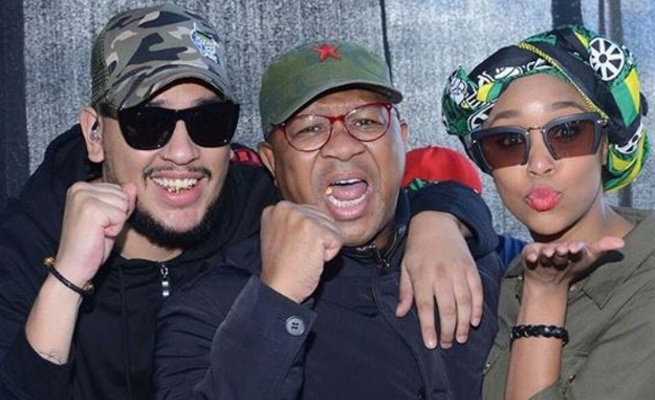 The rapper is very vocal about his support of the ruling party.

The current political climate seems to have activated the sceptic in many a social media user as every action, utterance, and occurrence is thought of and spoken about in relation to the upcoming national election.

The latest headline that has been subjected to conspiracy theories is AKA’s donation of R100,000 to students in need.

The rapper donated R100,000 to students at the University of Witwatersrand (Wits) in solidarity over recent protests and handed out food from McDonald’s to students following the symbolic cheque handover that took place at Wits’ Great Hall.

A few took to social media to question the kind gesture.

So @akaworldwide gives 500 burgers from macD to wits students and donates R100 000.00 to it's humanitarian fund. Come to think of it. MacD is owned by @CyrilRamaphosa and AKA is one celeb that Supports ANC. I'm Not saying but I'm just saying. "You Watch The Space" https://t.co/msgPqh6zJ9

Speaking on YFM during last night’s edition of YTalks with Oliver Dickson, the rapper rubbished these claims and explained that the money was earned through his proceeds from his upcoming Comedy Central roast.

“You know it’s February now and it’s registration time and these things always flare up around registration time. And the fees must fall movement was at its peak if you think about it maybe like last year of the year before. If you think about it, for whatever reason this year, the coverage, things as not as heard about or covered, it’s not really being spoken about on social media as much…” explained AKA.

He went on to state that students make up the majority of the fan base for local entertainers and he was inspired to do something for his supporters now that he was in a position to help out financially.

When asked about the source of the funds, specifically if the funds originated from the ANC, AKA adamantly rubbished those beliefs and stated that the funds were from his proceeds for the roast.

“I took this all out of my own pocket. Did you see any ANC people in the communications, did you see any ANC SRC kinda push [this]? This is me as a private citizen. You know where I got this from? I got some money from the roast. That’s why I wanted to do the roast,” he said.

In fact, he stated that he would be using the proceeds for that exact purpose in an interview with the Citizen last week.

In his YFM interview, AKA went on to ask how many musicians and local entertainers were politically aware or politically apathetic and urged them to get more involved.