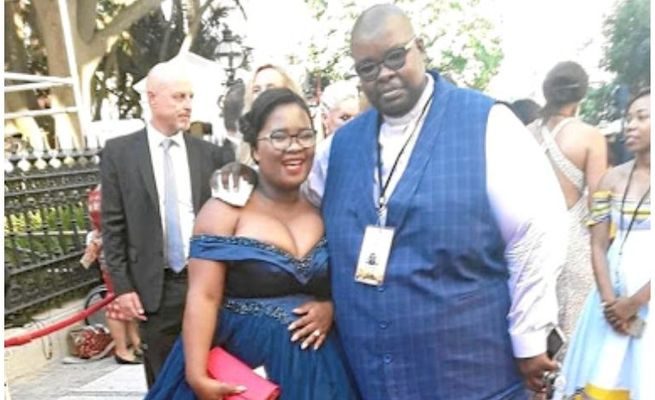 Award-winning gospel star and pastor Nkomfa Mkabile was involved in an unholy war of words on social media this week as he lashed out at critics who bashed his wife's dress at the State of the Nation Address in Cape Town.

The pastor's wife, Unathi Mkabile, rocked up on the red carpet wearing a blue dress that exposed her ample cleavage that many Facebook users deemed unsuitable.

Soon after Mkabile, who is also the founder of the Bethel International Ministries in Cape Town, posted a picture of himself and Unathi posing for pictures on the red carpet, a number of people criticised the dress.

Most questioned why a pastor's wife was dressed in an "undignified manner".

But the Ndoyenza hitmaker came to his wife's defence, telling the haters to leave his wife alone as he did not see anything wrong with the dress.

His unholy-like rant questioned some of the haters' sexuality and he labelled some of the male detractors as rapists, telling them to stop focusing on his wife's breasts.

Speaking to Sunday World, Mkabile said he was offended by the nasty comments.

"As her husband, I felt the need to defend her from all the naysayers. I was with my wife when she put on that dress and it was not for the first time that she had worn a dress like that," said Mkabile. "If I had a problem with the dress, I would have asked her not to wear it. Who are these people to tell my wife what to wear and not to wear."

Unathi said she feels even more let down by the attack from women. "It shows that we as women continue to pull each other down," she said.

"I don't understand why they felt the need to attack me like that. It is just an ordinary dress that exposes my cleavage. But I have learnt that people have a right to their opinions and on social media people say whatever they want."

But Unathi did get support from other fans who encouraged her to ignore the criticism.