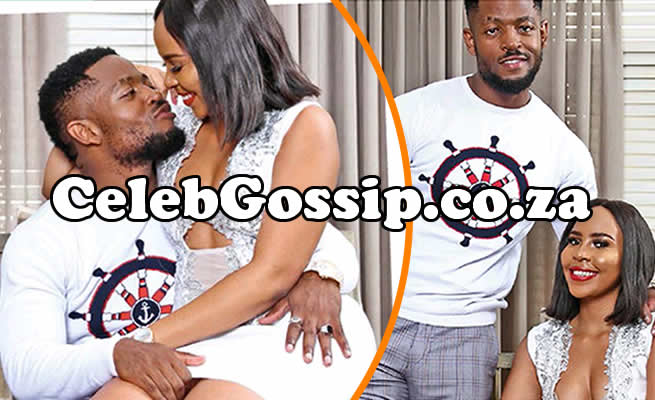 THEY kept fans guessing for months – were they or weren’t they an item? Rumours of a love affair had been doing the rounds for a while after the businesswoman hinted on social media she was more than just friends with the hot musician.

Heart-shaped hands peppered their social media pages and a flurry of love emojis filled their feeds. And when he posted a snap of himself holding hands with Brown Mbombo late last year, Prince Kaybee finally confirmed she was his new bae.

The pair have been inseparable since. We meet Prince Kaybee and Brown at five-star boutique hotel Fairlawns in Morningside, Joburg, where the couple have also booked a spa treatment.

Prince Kaybee (30), real name Kabelo Motsamai, deserves some pampering after setting stages across the country alight during the festive season – and he wants to spoil his ladylove too. He enjoys treating his loved ones. Last year the singer gifted his mom a brand new Mercedes-Benz for Christmas.

“She can’t even drive, but someone can drive her around,” Kaybee tells DRUM.

Brown (29) has been incredibly supportive, he adds. She’s been by his side as he travels the country doing gigs, and now he’s spoiling her with a spa day.

They’re clearly head over heels, but not everyone’s toasting their relationship. Kaybee’s fans have had a field day on social media. “Someone said we won’t last, and another person said I’m not pretty enough for him,” Brown tells DRUM.

She laughs as she recalls another post. “One girl said she hopes I trip and fall.”

With two successful albums under his belt, Kaybee is still getting used to fans fawning over him. He points to a sporty BMW with tinted windows standing in the parking lot. The Charlotte hitmaker left his personalised BMW at home because “driving that car is a problem”.

“A five-minute drive takes 40 minutes because we always have to stop for people who want to take pictures,” he says.

That’s why he loves being with Brown – his fame doesn’t bother her. “Some girls I’ve dated were fans – not Brown. This one doesn’t give a f***, Kaybee says.

“Outside I’m Prince Kaybee, but when I’m with her I’m Kabelo.”

BROWN is no stranger to being in the public eye. The model’s twin sister, Blue, shot to fame when she starred in Big Brother and Diski Divas. She made a few cameo appearances, but Brown isn’t chasing fame. “I’m a chill person. He has lots of female fans and it doesn’t bother me. Sometimes they push me out of the way to get an autograph, but I guess it comes with dating a celebrity.”

The couple have been dating since December, but they go way back. They grew up in neighbouring towns – Kaybee was raised in Welkom and Brown was born in Odendaal, in the Free State.

“But we didn’t know each other from back home,” she says.

They met on social media in 2016 after Kaybee had been frequenting Brown’s Facebook timeline. “Yoh, the first thing I saw was her legs,” he says.

“So I posted ‘ Brown Mbombo is flames’, and I tagged her.” When Brown responded with a thank you, Kaybee started following her on Instagram.

They struck up a friendship but Brown was reluctant to take things to the next level. “You know people always say celebrities aren’t loyal. Girls throw themselves at them and I didn’t want to go through all the drama,” she says.

But Kaybee wouldn’t stop his pursuit of the model, so she agreed to go on a date. “We met up when he was in Welkom. He turned out to be a good guy – friendly and funny,” Brown says.

They got on so well they dated for about a year in 2017. But their love came to an end when Brown accused Kaybee of not supporting her after her grandmother, Grace Tladi, passed away.

“I was very close with my granny and he knew that, but he wasn’t there for me. He was in Welkom at the time, but he didn’t go to the funeral. He left and went to his gig in Limpopo,” she recalls.

The two separated for a year and dated other people. During the break Kaybee got another girl pregnant and now has a 14-month-old baby girl, Nana. “She’s the girl who told the papers to say I wasn’t paying child support. That was a lie,” Kaybee says. “But she’s since apologised and we’re on good terms now. She wanted to get a helper and I wanted my mom to be the one taking care of the child,” he adds.

WHEN things between him and his baby mamma were ironed out, Kaybee reached out to his former flame. They rekindled their romance, he says, as “I was so in love with her I couldn’t think straight”.

They’d had their fair share of ups and downs, but Brown took him back because “he knows how to keep me smiling”.

Their split, she says, brought them closer together. “We talk about everything now,” Brown says. “We’re always together. I go to almost all his gigs.”

The lovebirds are crazy about each other but they’re taking things slow.

“Sometimes we talk about marriage, but we aren’t pressured to get married anytime soon,” Brown says.

The single mom says her son, Tinashe (8), and Kaybee’s son from a previous relationship, Tebogo (12), haven’t met yet.

“We don’t want to rush into anything,” she reiterates.

They’re also not ready to move in together yet. “We don’t want to vat ’n sit,” she says with a laugh.

For now they’re enjoying getting to know each other again. Brown runs KwaMbombo, the cleaning company she started with her twin, Blue, and their brother, Smanga.

“Kaybee doesn’t like going out and we enjoy each other’s company more so we cook at home and we chill.”

When he isn’t snuggling up to his bae, Kaybee is putting the final touches on his new album, Re Mmino (We are Music), which is due for release on 1 March.

Kaybee plans to tour Europe to promote the project and we’re sure Brown will cheer him on from the stands.