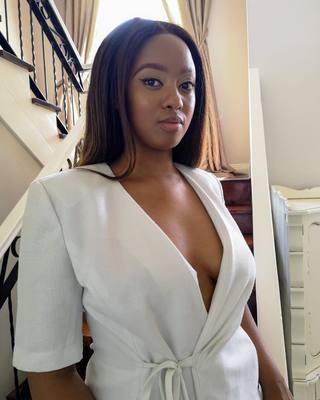 Nelisa Mchunu’s naked pictures cause havoc on social media. Nelisa sister to Londeka Mchunu who is popularly known as Snegugu on Isithembiso is slowly making a name for herself on our TV screens. Her love for fashion and Fabolous outfits getting our attention. The actress is known not only for her gorgeous looks and great weaves but also for her great sense of style and most importantly her acting. We look at some of our favourite outfits from the actress who has made a mark for herself in youth drama series Isithembiso.

Actress and motivational speaker, Nelisa Mchunu plays the character of an outspoken girl that is so in love with Pastor Nkosi. The storyline involves a pastor being a s-e-x pest and a church thief. Contrary to her character on the show, she has come out strongly against dishonest pastors.

Uzalo fans love how Mchunu’s character ‘Fikile’ appears to be off-ish on everything, as if she isn’t quite sure of anything, and is struggling just to manage as a functional member of society. Nelisa says that women should not allow a man, regardless of his position to make them do something that does agree with their morals.

This is why she is a free spirited person and for that reason, she doesn’t care to show off some skin to the world. She posted her latest pictures and they have caused chaos and havoc on social media especially Instagram. Check the pictures below…

I had the best birthday getaway ever! Thank you to everyone that sent me such loving messages. I love you all so much ❤️❤️ Shot by: @shellingsonsa Hair: @seventh_park_hair