A mother has taken to social media to seek help after having sex with her son.. Yes, her biological 18 times.

The bizarre story which was shared by @AHoeStory on twitter was met with mixed reactions, as many are doubting the authenticity of the story.

According to the lady, She says she is a mother of 3 children, 2 boys and a girl, and her first son is 20 years, (Meaning she should be in her early/late 40s or there about).

She says her family is well to do, but problem started when she went into her son’s room unannounced and saw him naked. ‘I immediately fell in love with his manhood, His manhood is so big with a curvy head and a bit long’, she gave a detailed description of what she saw.

She continued saying ever since that day, she has m**turbated to the image of her naked son at least 5 times daily. Even being at work doesn’t stop her from fantasizing about her naked son.

She finally called her son to her room one day and told him to undress for her, which he did, she says she grabbed his manhood, and things escalated from there.

Now it’s become a regular thing for her to sleep with her son, as they’ve done it at least 18 times.

She says she is confused and needs advice. Read how she shared it below: 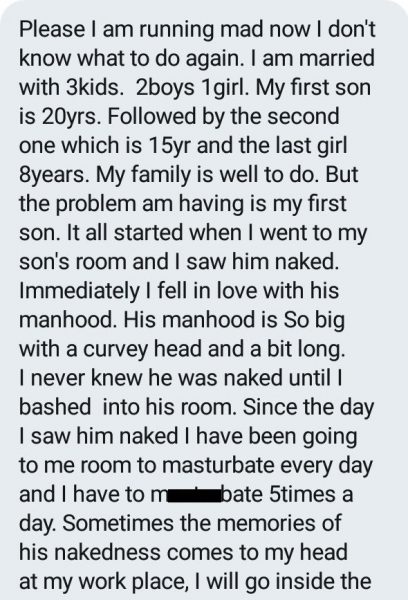 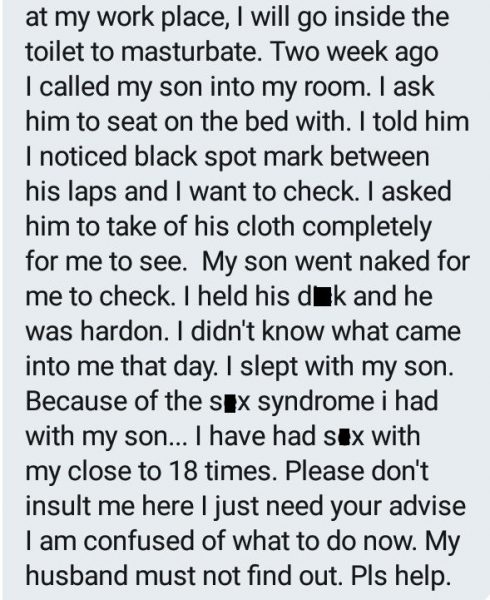