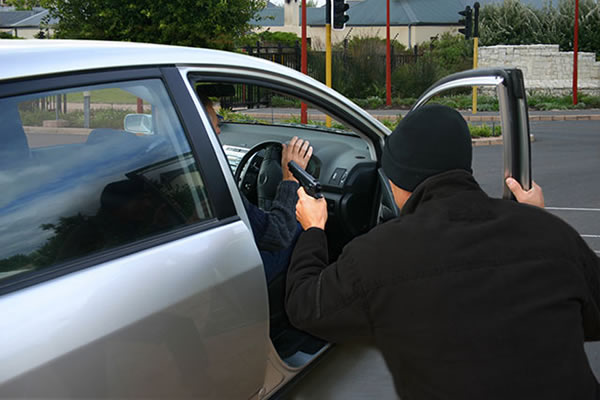 While hijacking is often described as a ‘crime of opportunity‘ in South Africa, motorists have also been warned that they risk being followed home from shopping centres and other public places, in order to be robbed of their possessions.

Speaking to BusinessTech, Agnieszka Gryn, regional executive at Fidelity ADT, explained that ‘spotters’ are often used in these areas to identify people withdrawing large sums of cash from ATMs.

She noted that they often target shoppers who wear expensive watches and jewellery – and that they are mostly looking for cash, jewellery and cars when selecting someone to hijack.

“One can be a target anywhere but most commonly at shopping centres, schools and airports and in your own driveway,” she said.

How to avoid becoming a target

Gryn said that it was important to be alert at all times and never get distracted by mobile phones or kids in the car.

“Regularly check in your rear view mirror and around you if stopped at a stop street or robot, for any suspicious vehicles. Remember there could be more people involved than just the ones following you,” she said.

Gryn added that technology has made it possible for multiple people to communicate and talk about your moves.

“If the one stops, another may just take over from them, so don’t let down your guard and get distracted. They will probably drive past you a few times, then change lanes and fall back again when you least expect it.”

Travelling from the airport

Gryn noted that returning South Africans and tourists are increasingly being followed when leaving from the airport.

As such she said that it is important to use reliable and reputable transfer services (preferably someone who is trained in defensive driving), and to drive to the nearest police station or security point if you believe you are being followed.

“Do not carry large sums of cash or flashy/expensive jewellery when travelling,” she said.

“If this cannot be avoided, be sure to keep it hidden and in a safe place while disembarking, collecting your luggage and finding your transport at the airport.”

Gryn added that when arriving at a hotel or residence, drivers need to practice the following hijacking prevention tactics:

“Staying alert is probably the most important tip. Too often we are distracted which makes us vulnerable to criminal activity,” she said.