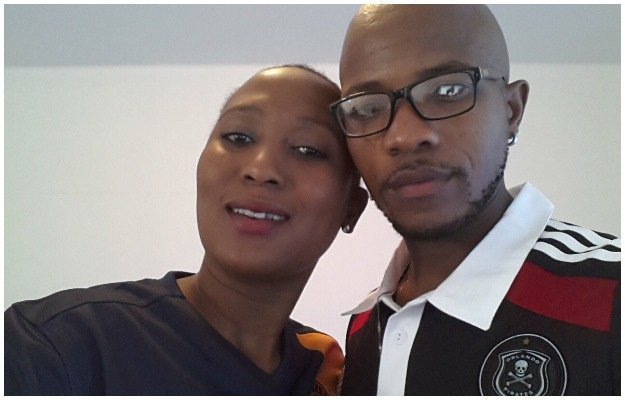 Thulo Mahase, a Sports News reader at Cut FM, lost his wife and childhood sweetheart just four months after she gave birth to their third child together – and he sunk into a deep depression soon after the tragedy.

Now, the 33-year-old father-of-three from Bloemfontein is sharing his story and how he will not allow life to bring him and his children aged two, eight and ten, down.

This is his story.

“I had been with my late wife from 2001. We started dating when I was 17-years-old and she was only 16. We had a great relationship and even called ourselves Romeo and Juliet. We had our slogan as a couple where we’d call our relationship ‘always and forever’ and vowed to be together forever through the highs and lows.

In 2008 we were blessed with our first child, a boy who we named Lewatle, which means the sea and represents how big and astronomical our love is. Two years down the line, we were caught off guard by conceiving baby girl.

We didn’t want any more children after her so we named her Phomolo which means our last – little did we know that there was more in store for us.

In 2013 we decided to get married and we wed on Christmas day. Three years into our marriage we were surprised by the conception of our third child. That’s where tragedy began.

In 2016 my wife started becoming ill. She was pregnant with Omphile and instead of us being happy, she would always cry from being in pain. My wife lost weight and her health condition deteriorated day by day.

She couldn’t eat and when I forced her to, she would throw up a few minutes later. Seeing her like that that killed me emotionally.

I now had the responsibility of looking after Lewatle and Phomolo as well as my then pregnant wife.

That year was full of sorrow for us. We went in and out of doctors’ rooms without getting any help. On 26 July 2016, baby Omphile was born but then the real life and health problems officially began.

My wife stayed in hospital for three days because the child was very tiny, for the first time I could see my wife wanting to come home to us, I told her that the baby should get healthy first although my heart was broken from seeing her wanting to be with her family so desperately. I also had to juggle my job appointments and my family.

Finally, they were discharged and my wife still couldn’t eat. She asked her family to come over to help with a baby so that I could go try make money and put bread on table but unfortunately nobody was willing and four months down the line, my wife suddenly passed away. She slept and never woke up, I was broken, I cried non-stop, when I thought of raising my children alone.

Omphile doesn’t know her mother, they don’t even have pictures together. I had to bury her alone, no family showing support and trying to understand what I am going through, now I had to start my life alone. It was forever dark.

I became overly protective of my children and we would share a bed together. Can you imagine four people in one bed.

We lived with tears, particularly me. I got my children counselling so they could cope and I tried getting help but no amount of words could comfort and heal my broken heart.

I could always see her in my dreams and that made me believe that she was coming back, I visited her grave so often that everyone thought I am going crazy.

Years of depression and grief went by and in 2018 I finally got up and made the decision to fight for my family and came back wiser, stronger and more eager to challenge life and stop throwing a pity party for myself.

I am raising kids who are doing extremely well at school and even though they have no mother, we gained wisdom the moment we accepted that she isn’t really coming back. I am happy to say that we have come out of this stronger than ever.

Although I must admit losing her was and still is hard to accept the bottom line is that we must put ourselves together and face the world united.

Instead of crying now (and crying is okay too), we sing and pray and say God will come down to us. They have proved that we are living testimonials. This my story, not even half of it but their story will be a better one than this.

Life and time are best teachers.”