Home Blog My husband had sex with his best friend's wife while I was... 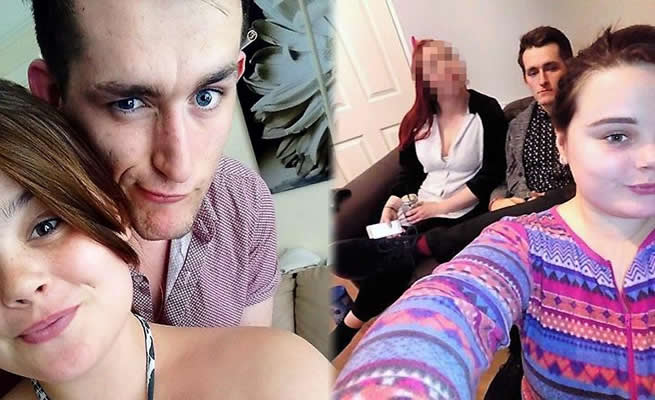 House wife and mum of one Katie Duffy, 22, trusted her fiancé Jack implicitly. Until the night she encountered the unthinkable – him having sex with her friend in the same bed as her. Now Katie, from Manchester, who shares a son with her love rat ex, opens up about what happened that night…

As soon as I met Jack through a friend I was smitten – he was a right laugh, really kind and really funny. Our first date was to Costa Coffee – and our second date was too. It was on that date he asked me to marry him. I thought he was joking at first but when I realised he was serious, I said yes.

I knew it was quick but I really liked him. He spun me around and we hugged and kissed. Our friends and family were all dumbfounded. They all said that we hardly knew each other but we didn’t care. We moved in together and couldn’t have been happier. But after three months I realised something was up.

I was pregnant. I told Jack and he was the same as me: a bit worried, a bit nervous, but really happy. As the months went on we got ready for the baby. We moved to Liverpool, closer to his work and we got the nursery ready. He was at my side when our son was born. I was blown away by him. He was absolutely perfect – my heart just melted.

Back at home we settled in a new routine. Jack helped out when he wasn’t at work and I thought we would be together for life. Jack often told me about his mate Pete* at work. Now he and his wife had invited us round with our son. I couldn’t wait. Pete was friendly and introduced me to his wife Amelia*. We got on really well, she was great fun and we had so much to chat about. After that she would come round for coffee or I’d go round to hers. We’d go out shopping together too, taking my boy in the pram. I was so pleased it had worked out so well, the four of us all being friends.

Sometimes Jack would go over to their house. I thought it was always to see Pete, but then I found out that sometimes he went when he wasn’t there, it was just him and Amelia. Alarm bells rang but Jack told me not to be silly and it was his friend’s wife. I told myself not to be suspicious. But then when Amelia was around our place and Jack was home I’d catch them together, they were so flirty.

They’d give each other little looks too if they thought I wasn’t watching. Then one day Amelia came round upset because she and Pete had been arguing. Jack and I settled her down on the sofa with a glass of wine, and then he made himself scarce while I chatted with her. She had a few tears and a bit of a moan about him.

Jack told me he’d messaged Pete and told him she was safe with us. Soon she had a smile on her face again and we were laughing and chatting. It was getting on though and we were getting tired. So we all headed up to our room to watch a film, Me Before You. We had a king-sized bed so it made sense. Jack was in the middle with me and her each side. But there was loads of room so it wasn’t awkward and we settled down. I’d been looking after our son all day and I was shattered. It was late and I could feel my eyes start to droop.

I woke suddenly hours later and was sickened by what was happening. Because, next to me on the bed, was the sound of my fiancé and my friend having sex. I hesitated at first – I didn’t know what to do. But the shock quickly lifted and I yelled: "What the hell are you doing?"

They sprang apart. Jack was naked but Amelia had most of her clothes on. They both left and I vowed never to forgive them. I threw the bedding into the washing machine and went on to tell my family and friends what had happened. They were as horrified as me and everyone rallied around to support me.

Later Amelia messaged me and confessed. She said they’d slept together a few times before that night. It was a really tough time and without the support of my friends and family I don’t know how I would have got through it. It's a year later and Jack and I now get on OK as friends.

I’m doing really well because I’ve met someone else and he’s absolutely amazing. I've told him what had happened and warned him I had some trust issues. But he’s worked hard to prove himself to me and I couldn’t be happier.

I still can’t believe what happened that night. How could he have done that to me? We started off watching a romantic film but I ended up in the middle of a horror film. Jack confirmed what had happened to The Sun.

*Names have been changed