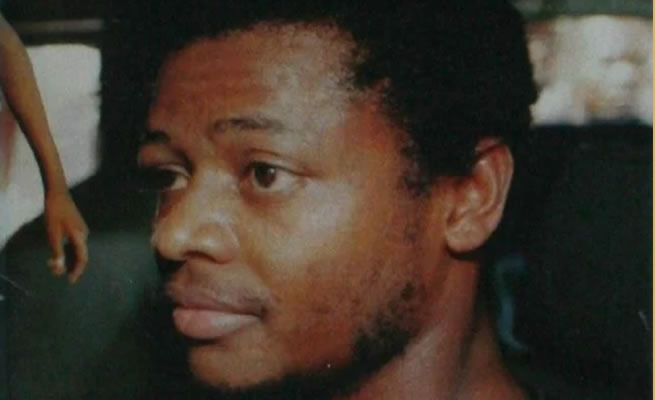 The courtroom is packed, but so quiet you can hear a pin drop. The people have come to see four men accused of being some of South Africa's most dangerous animals.

But one man in particular fascinates them, He sits almost motionless in the dock, a Muslim skullcap on his head.

Occasionally he scribbles a note on the pad in front of him, or he gently scratches his ear.

This is Collin Chauke who, with his co-accused, is facing charges of robbery with aggravating circumstances arising from an incident in which R12 million was stolen from a Pretoria security firm in 1997.

And judging by the number of heavily armed policemen outside the Pretoria Magistrates Court, they're taking no chances.

Chauke has made several daring escapes from police custody and is considered the most dangerous of the alleged robbers.

In court he wears a special stun belt designed to stop him getting away again.

As Johannesburg newspapers observed, his escapes have made him even more notorious than the cash heists he's allegedly been involved in. But it hasn't always been like this for Collin.

Ask the small man in the front row of the courtroom's public benches – Collin's father, Freddy Chauke, a retired barman.

His son has become one of the most notorious figures in South African crime history, but Freddy doesn't seem to follow the court proceedings, spending most of the time adjusting his thick spectacles.

"He is the fifth of my nine children," Freddy says when we meet later at the family home in Soshanguve, north of Pretoria.

"He has always been a sweet child who never caused me any trouble." Born in Mamelodi in June 1 970, the man now dubbed the "cash-in heist kingpin" was christened Collin Xirhami.

His second name is the Xitsonga word for "the cold of winter". He attended various schools as his large family moved around in the '60s and '70s, when a nomadic lifestyle seemed more popular than it is today.

"He was a brainy child who never repeated a class," says older brother Alex. "He would never argue, even when I got really mad with him.

Instead he'd sit quietly in a corner and cry himself to sleep." Collin had two major passions when he was growing up: gardening and music, especially the music of Michael Jackson.

When he'd finished working in the garden Collin would wash and put on his Whacko Jacko outfit, tight pants and short-sleeved shirts with the sleeves rolled up to expose his muscles. He even wore his hair in an Afro style.

The turning point in Collin's life and the lives of so many young men and women at the time – came in Winterveld in the 1 980's. The region, which bordered on a number of Gauteng townships, was under the iron rule of Lucas Mangope, the feared former Bophuthatswana leader.

"Life was tough at the time," Alex says. "You were either with the comrades or against them." Collin and many of his friends opted to be with the comrades, who were virtually a law unto themselves.

But Mangope's police were determined to crush them. "I was nearly killed by police bullets when they came looking for my boy," Freddy says.

"One of them said the next time they shot at me I wouldn't be so lucky." But the worst moment for the sickly old man was when Collin, by then a comrades leader, was nearly hanged by the police.

Collin skipped the country after that. "I didn't know what to think because there was no word from him; he didn't write," Freddy says.

"Like any parent in that situation I was worried sick. I feared the first I'd get to hear about him was that he was dead. Life in the Chauke home went on pretty much as usual in Collin's absence, with Freddy sticking to his R300-a-month job at a Pretoria hotel and his wife Betty continuing to practise as a sangoma.

When Collin returns from exile in Zambia, after what Freddy says were "many" years, he worked within ANC structures in Winterveld.

The former Umkhonto We Sizwe cadre soon to rose to the position of councillor.

Collin organised a ritual slaughter on his return and invited his granny Josina Mhlanga, a spiritual healer.

She has always had a special place in his heart because he grew up in her Winterveld house. Even when we moved to a new house in Soshanguve Collin stayed behind," Alex says.

The house is a humble five roomed place, the inside walls plastered with cow dung. A hen comes and goes at will, followed by an army of chicks.

Collin was always helpful, says MaMhlanga. She called him "lekgowa la ka" – "my white man" – because of his light complexion and handsome looks.

"He was handy around the house and herded the family goats," she says. When he grew up and moved out he'd return sometimes with a bit of money for her to buy meat or sugar.

He was even more generous with the rest of his family. He bought four new taxis and put Alex in control of them.

His father agrees life was never better. Then came the bombshell. The soft-spoken, hard-working son and brother was said to be part of a ruthless gang that robbed cash-intransit vans and later staged dramatic escapes from prison. "it came as a shock," Freddy says.

He looks much older than his 79 years and has developed more health problems since the story of his son broke. Alex and his father are the only two family members prepared to speak about Collin.

The rest cringe at the mere mention of his name. They know he's charming and has a wonderful smile but, they say, he's never brought a girt home with him.

The only thing they know about his love-life is what they read in the newspapers. The little boy who used to pretend he was Michael Jackson is no more.

In his place is someone the authorities have branded a very dangerous criminal. When Chauke goes to court, most of Pretoria comes to a standstill amid a cacophony of police sirens. There are enough weapons in and outside the courtroom to stage a small war.

And sometimes when he moves you catch a glimpse of the electronic stun belt under his chic navy suede jacket The sweet child is very different now.

Collen Chauke, South Africa's most wanted fugitive, was captured in Nelspruit. He was arrested at a roadblock in Nelspruit near South Africa's border with Swaziland and Mozambique late on Tuesday evening. Chauke, a former member of the African National Congress' armed wing Umkhonto we Sizwe, was arrested in connection with a R12,6 million robbery from the SBV cash depot in Pretoria in October 1997.

He famously escaped with five others from Pretoria local prison two months later after holding a prison warder hostage with a handgun. The South African police had named him as their most wanted criminal in 1998 and offered a large reward for information leading to his capture. Police further linked Chauke to 17 murders and 30 robberies in which R82-million was stolen.

He died in 2003 in Kalafong hospital, under the watch of security guards. While in prison in 2000, he converted to Islam and decided to change his name to Shiram Iman Dawood.