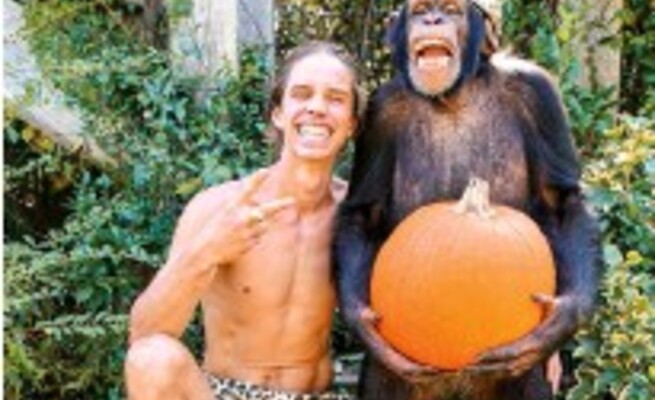 Raised in a wildlife park, Kody is happiest in the company of animals and he says he has a magical connection to them

HE’S happiest with his shirt off, cavorting in the open air with his four-legged buddies, some of whom weigh four times more than he does and could kill him with one swipe of a giant paw.

Meet Kody Antle – a real-life Tarzan who’s become a social media sensation thanks to his incredible bond with wild animals.

The 29- year- old’s Instagram account is filled with videos of him play-wrestling Bengal tigers, monkeying around with chimps and hanging out with Bubbles the elephant, all of which reside at his family’s Myrtle Beach Safari park in South Carolina in the USA.

It doesn’t hurt that Kody himself is easy on the eyes. With his long hair, playful grin and chiselled body, he’s something of an attraction himself. But he shrugs off the attention – his focus is solely on his animal pals with whom he seems to share a secret language.

“I really believe I have some otherworldly connection with these animals because of the way I’ve been raised,” he said. “We have this Tarzan-like connection.”

Kody may be “the only person in the world living like this”, said his father, Bhagavan “Doc” Antle. 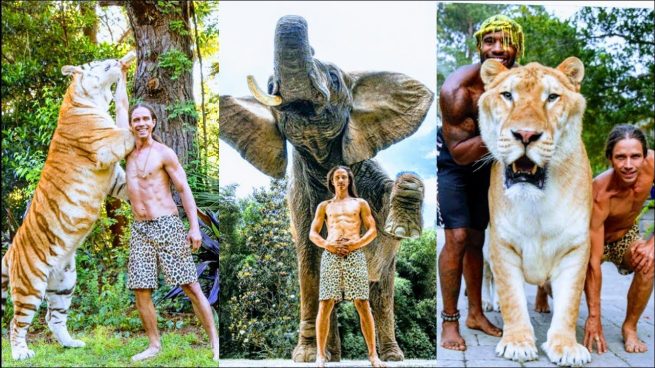 The veteran conservationist founded the 20-hectare sanctuary in 1982 with the aim of saving many rare and endangered species from extinction. Today these include tigers, lions, cheetahs, orangutans, chimpanzees, gibbons and gorillas. He credits his love for wild and exotic animals to his upbringing on a cattle ranch in Arizona where, from a young age, he’d raise and care for every animal he could get his hands on.

Later he travelled the world and spent many years in Asia where he received a doctorate in medicine and learnt to work with tigers. Today he’s widely recognised as one of the top animal trainers in the world – and his skills have been used in more than 500 films, including Ace Ventura, Mighty Joe Young and Dr Dolittle.

KODY and his younger sister, Tawny Sky, were born and raised at the park, which today is considered one of the premier private wildlife facilities in the world.

For these siblings, playtime was spent not inside with toys but tumbling around outside with an assortment of lion cubs and baby monkeys.

“Growing up, I realised my life was unique,” Kody said. “I always had a deeper connection to animals and I just wanted to be naked running around with tigers.”

Getting to know a wild animal starts from birth, said Kody, who’s the park’s main trainer and often travels to Asia and Africa to help train staff at other wildlife facilities.

“Building a relationship takes time, but animals will actually show you a side of themselves you didn’t know existed, whether it’s their intelligence or a unique personality trait.”

One of the animals he’s closest to is Bubbles – or his “big sister” as he refers to the elephant. His father rescued her as a calf in South Africa in 1984 after poachers had killed her parents.

One of the park’s biggest attractions is Hercules the liger. Bred from a female tiger and a male lion, he tips the scale at more than 400kg and stands 3,4m tall on his hind legs. Small wonder he’s a threetime Guinness World Records titleholder for the largest living cat.

For Kody, whose job it is to work and care for the nearly 70 big cats, a large chunk of his day is dedicated to answering the many queries he gets on Instagram.

Probably the most common question is why he blows into the tigers’ faces when he’s playing with them. As he explained it’s called “chuffing” – and “it’s a type of communication unique to tigers”.

But while his 1,7 million followers usually have no problem with his posts, his uploads have on occasion landed him in hot water.

Last year he caught flak over a video in which he’s seen giving his dog a bath with the help of two of his chimp pals, Vali and Sugriva. The three are seen soaping the pooch in a tub to the tune of Splish Splash.

While many found it cute and funny, others criticised it, saying it was unnatural behaviour. “I don’t trust those chimps. They belong in the wild. Chimps aren’t pets,” one unhappy viewer wrote.

This isn’t the first time one of the park’s apes has caused a stir.

Sugriva went viral early last year when she was seen using a phone. The video even caught the attention of renowned primatologist Jane Goodall.

“I’m very disappointed to see the inappropriate portrayal of a juvenile chimpanzee in this video, which is circulating on social media,” the 85-year-old said in a strongly worded statement.

“Chimpanzees are highly social animals, very intelligent and have complex emotions like humans – it’s imperative that we portray them appropriately.”

YET for many animal-lovers the park remains an irresistible attraction – a chance to get up close and personal with these magnificent beasts. Many strive to work there but the park has strict criteria for wannabe employees.

For starters, all staff must complete an intensive apprenticeship. No formal education is required but recruits must be single and childless. They also have to be within 10kg of their “perfect athletic weight or working to get there” and fit, which translates to being able to do push-ups and pull-ups and run 20km.

They must also be vegetarian and not smoke or drink. Most importantly, they have to commit to the park not simply as a workplace but as a lifestyle – and as a result they get little time off.

“A lot don’t last,” Bhagavan says. “I tell my apprentices: after two years all you’re going to do is know what we do for a living, but you’re not going to know how we do it. In five years, they go, ‘Wow, it’s really complicated’. And in 10 years most of them don’t want to do it. It’s hard work.”

And for all those wondering, Kody hasn’t found his real-life Jane yet – so potential suitors better prepare to get their chuff on.