It took doctors eight years to realise that she had two punanis.

She was shocked to discover that she in fact had two vaginas, wombs and cervixes.

Molly-Rose Taylor (19) was diagnosed with uterus didelphys which is a rare condition that doubles the number of reproductive organs.

She reportedly started getting worried when the cramps caused her to often faint.

The Daily Mail reported that when she inserted a tampon to soak up the gush of blood, it would continue to pour out.

Doctors later discovered this was because she had a second vagina.

Ms Taylor has since had an operation to remove the tissue dividing her two vaginas – but she has opted against any other procedures to treat her condition. 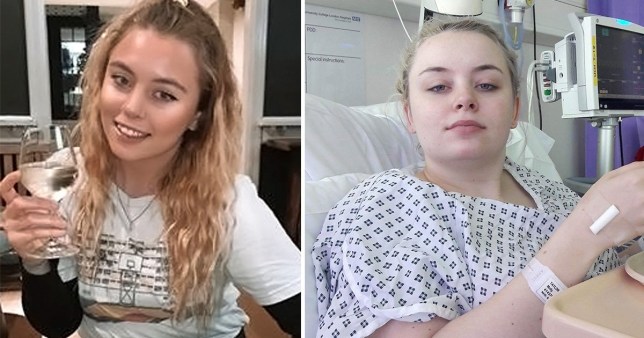 Molly-Rose Taylor, 19, was finally diagnosed with uterus didelphys, a rare condition which means she has two vaginas, cervixes and wombs

Molly-Rose said: “When I first started my periods, doctors would blame my age and say my body is still young and can't cope.”

Until 2017 when she had an operation to have it removed, Molly-Rose had a 2cm-thick wall of tissue dividing her vagina, known as the longitudinal septum

“As I got into my early teens, I attempted to use tampons, but it would fall straight out, I thought maybe it was normal.

“It wasn't until I became sexually active with my then boyfriend, I began to worry as it was impossible and very painful.”

From the outside, her two punanis – caused by a dividing tissue wall known as the longitudinal septum – are impossible to spot.

'Before my diagnosis I was advised to get tested for a sexually transmitted disease due to the bleeding and abnormal discharge.

The publication reported that after eventually learning of her condition from a gynaecologist in 2017, she has lamented the lack of awareness of uterus didelphys, which affects around one in 3,000 women.

WHAT IS UTERUS DIDELPHYS?

Uterus didelphys, also known as a double uterus, is a condition where a woman is born with two uterus, to separate cervixes and sometimes two vaginas, though this is not always the case.

It occurs because in a female foetus, the uterus starts out as two small tubes.

As the foetus develops, the tubes normally join to create one larger, hollow organ — the uterus.

Sometimes the tubes don't join completely and each one develops into a separate hollow organ so the woman is born with two wombs.

It often only becomes noticeable after puberty and is diagnosed with a physical exam or an ultrasound scan.

In terms of physical anatomy, the two wombs are often slightly smaller than average in order to fit, though they can be as big as a 'normal' womb.

It also makes it possible to be pregnant twice at the same time – with a baby in each womb.

Some women are also born with two vaginas, although they can have sex and menstruate in the same way as people with just one.

'They may know they have two and be able to find them, or they may not realise,' Dr Leila Hanna, a consultant gynaecologist & Obstetrician at BMI The Sloane Hospital, told MailOnline.

'It can be painful because there are two squashed in the same area, so sometimes we do an operation to join them together, but its not necessary.

'They could also have abnormalities of their kidneys and the tube which bring the urine from the bladder.'

Women will frequently have a slightly higher risk of late miscarriage, premature delivery and bleeding during pregnancy.

Often Caesarean sections are recommended, to reduce the risk of complications.

There is no treatment or cure for the condition.