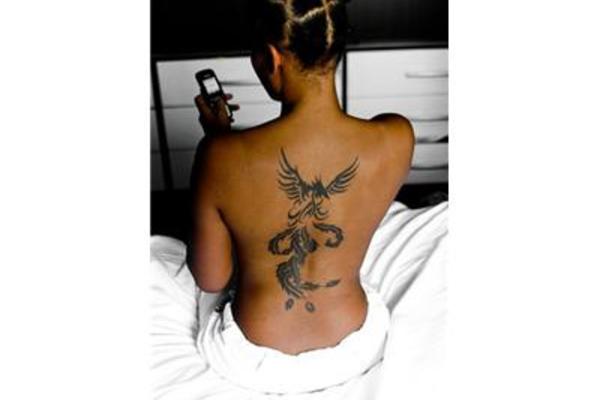 Tattoos are much more than just pictures on the body. For some groups of people, tattoos have a special meaning that makes a certain impression of the owner. So, if someone has a tattoo that doesn’t correspond with their personality or social status, it may be taken as an offense.

We decided to show you the most dangerous tattoos in the world, that can cause a lot of trouble. As it turns out, in some countries, you can go to prison for a tattoo or it could even cost you your life.

A tear under the right eye often means that the owner committed murder or attempted to. Many people get this tattoo if a loved one is doing time in prison or has died tragically. This tattoo may lead to trouble only in the case that someone got it for fun, because in the criminal world, people believe that you have to “earn” every tattoo.

A picture of any god on the body is blasphemy, this is why tourists with these tattoos often end up at police departments when they travel to Buddhist countries.

In Japan, only people who are part of the Yakuza have the right to have such tattoos. This is the most powerful and bloodthirsty criminal gang in the country. So anyone else who has this type of tattoo and is not Yakuza will most likely encounter trouble.

People often get a shamrock tattoo for luck, but if you accidentally get a tattoo with 3 leaves instead of 4, this will mean you are a part of an Irish criminal gang. So, if a member of this gang sees a person with this tattoo and realize they are not part of the gang, they will run into some major trouble.

In the world of organized crime, a barbed wire tattoo means that a person was convicted. Every knot on the wire stands for one year in prison. This is why when a law-abiding citizen gets this tattoo, ex-convicts may take it as an offense or even a joke. This could make the tattoo owner’s life way harder.

Regular people associate a snarling predator with a brave, courageous, and powerful person. But in the criminal world, people who have this picture on their body basically say that they have an inclination to violence and are ready to commit a violent crime and not feel sorry for it. So, if you have this kind of tattoo, you may get into some serious trouble because criminals think you have to deserve the right to have this tattoo.

Rings on fingers are the fastest and easiest way to tell if the owner was convicted and was a respected person in prison. Every ring shows the power of their authority and their experience. So, if an ex-con sees these tattoos made for fun, they will probably not like it since it offends their principles.

Cross on the chest

A tattoo of a big cross is very dangerous to have in Russia. This is the tattoo that the most dangerous criminals in Russia get. It is really risky to get this tattoo for fun because if an experienced criminal sees it, the owner may be accused of lying.

A spiderweb is sort of an autobiography among convicted people. It means that they were convicted for a long time and that they fought drug addiction. One ring in the web represents one difficult year from someone’s life. This is how criminals recognize “their people” and they have a very negative reaction to people who get these tattoos just because they like them.

In the US, the 5 points of the crown are the symbol of the Latin Kings gang. They are one of the biggest Hispanic gangs both in and out of the prison. Obviously, it is extremely dangerous to get this tattoo for fun.

This little tattoo means the same thing all over the world — Mi vida loca (My crazy life). It doesn’t say anything specific about the owner, aside from the fact that they broke the law or have some other connection to the criminal world. Obviously, if you have never had any trouble with the law, don’t get this tattoo… unless you want trouble.

A star is a regular tattoo for people who were in prison. The meaning changes depending on the place where the picture is. For example, stars on the knees mean that this person will never submit to anyone’s will and stars on the shoulders represent power and respect. People from the criminal world have a very negative reaction to people who get these tattoos just for fun.

In the world of organized crime, every playing card has its own meaning. This is why several cards can tell a lot about a criminal, the prisons they were in, and how big of a boss they are. If the meaning of the cards has nothing to do with the life of the owner, some people may treat this as lies.

Rose, pierced with a dagger

This seemingly romantic tattoo is done on prison only in the case when a person goes to prison before they’re an adult. A rose without a dagger means that a person became an adult (turned 18) while they were already in prison. These people are treated as experienced prisoners and if a person has this tattoo and has never been convicted, it may lead to a conflict.

In Brazil, this picture may cost you your life because it is a very rude offense toward law enforcement. This is because in Brazil, only people who’ve killed a policeman get these tattoos.

The people who have tattoos that are related to serious political and religious topics should be ready to fight for their views at any moment. In many countries, these pictures on the body are punished with fines and even prison sentences, especially if these tattoos offend the faith and ideas of other people.