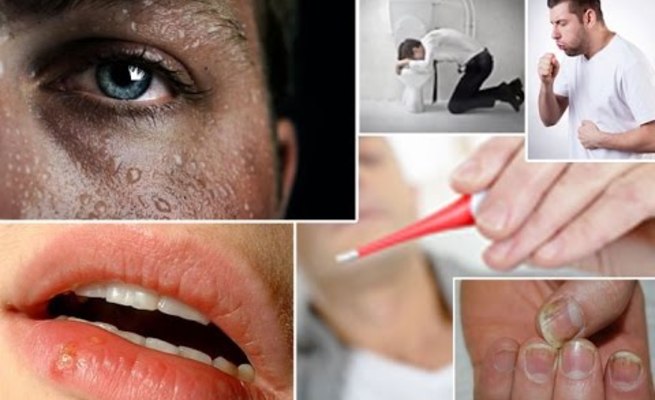 Don't let the signs (or lack of sign) prevent you from getting tested.

No signs or symptoms can diagnose an HIV infection; only an HIV test can. With that being said, the appearance of certain symptoms can sometimes hint that an infection has taken place, particularly if you believe that you've been exposed to HIV or have simply put off getting yourself tested.

The U.S. Preventive Services Task Force currently recommends that all Americans ages 15 to 65 be tested for HIV as part of a routine doctor visit and that anyone who tests positive be given immediate treatment. This can help prevent you from getting seriously ill.

If you believe that you may be infected, either because of accidental exposure or a symptom that's worrying you, do yourself a favor: get tested today.

A rash is often the first sign of an HIV infection, although it appears in only two out of every five newly infected individuals. That said, it does have a specific appearance and is often described as being maculopapular.

That means that it contains both macules (flat, discolored areas of skin) and papules (small bumps). If you have any concerning or unexplained rash, schedule a doctor's appointment and ask your physician to check it out. Also, use the opportunity to get tested for HIV while you're there.

Swollen lymph nodes (also known as lymphadenopathy) often present in the early stages of infection. Frequently appearing on the neck, below or behind the ear, in the groin, or under the armpit, lymphadenopathy can not only be painful at times but also unsightly in more severe cases. If you're experiencing lymphadenopathy, whether it's painful or not, visit your doctor to get tested for HIV.

Many people have experienced "morning mouth." It's that pasty, bad tasting yuck that coats your mouth each morning. But what if the bad taste and white coating don't go away with simple brushing? Then you may have a common sign of an HIV infection: thrush.

Also known as oral candidiasis, thrush is a sign of a weakened immune system and can often predict the approach of an advancing illness. While it is commonly seen in the mouth, it can also present in the throat and in the vagina. The appearance may not instantly spell HIV, but it certainly warrants an examination and an HIV test.

Contracting other sexually transmitted diseases (STDs) can significantly increase the risk of getting HIV. For instance, some STDs like syphilis and herpes can skin lesions that make it easier for HIV to enter the body. STDs may also cause inflammation, which is something that is triggered by the body's immune system. HIV preferentially infects defensive white blood cells, so when there are more of them around, it's easier to contract HIV.

Having an STD like gonorrhea or chlamydia also always means that you've engaged in unprotected sex, a key risk factor for HIV. So if you have been diagnosed with an STD, talk to your doctor about how you can reduce your HIV risk.

Look out for unexplained, drenching night sweats that are so intense that they may soak your bed sheets. Night sweats (also known as sleep hyperhidrosis) occur frequently in people with HIV, often because of an undiagnosed opportunistic infection or as a direct result of HIV itself.

If you're experiencing night sweats and are not sure what to do, discuss it with your doctor and get an HIV test if you haven't already done so. It may not be HIV in the end (since night sweats can be caused by other conditions, such as the flu or a fever), but getting tested can provide you a peace of mind moving forward.

Weight loss is commonly seen in people who have a long-term HIV infection, usually in more advanced stages of the disease. This isn't the loss of few pounds; think: ​sudden, unexplained weight loss of 10 percent body weight or more. If you've been holding off getting tested and are suddenly shedding a worrying amount of weight (that may be accompanied by weeks of chronic diarrhea), now should be the time to visit your doctor and get tested. Don't delay.

As counterintuitive as it might seem, the most likely symptom of HIV is no symptom at all. This is particularly true during the early stages of the disease, where as many as two out of three newly infected individuals will be wholly unaware of their infection.

That's not to say that these very same people might not suspect that they've been exposed to HIV. In many cases, if a person has had unprotected sex, he or she might worry for a couple of weeks. Then, if nothing happens and there are no signs of illnesses, the person assumes that everything is A-okay.

It's important to never assume that not having symptoms is the same thing as not having HIV. If you're ever in doubt, get tested right away. It's easy, it's confidential, and it will get rid of the stress of not knowing.

And, if you ever fear that you've been exposed to the virus, don't wait to take action. Drugs called post-exposure prophylaxis (PEP) are available, which may avert infection if they're taken less than 48 hours after unprotected sex or other high-risk activities.